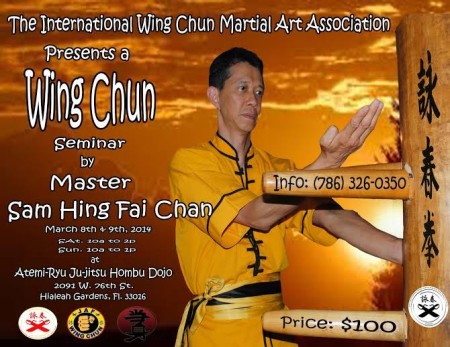 Wing Chun Kung Fu
Wing Chun is the most widely known and practiced style of Kung Fu in the world. It is direct, efficient, practical, and easy to learn – (Factors that make it one of the best martial arts for women as well.) Rooted in physics of bodily motion, Wing Chun emphasizes technique over  brute force and empowers smaller or weaker practitioners to overcome opponents much larger or stronger than themselves. Wing Chun is a powerful close-quarters style of self defense - ideal for use in confined spaces such as airplanes, buses, offices and bars, places where obstacles that limit mobility.

A fundamental principle of Wing Chun is the centerline theory: the theory that a straight line is the shortest distance between two points.
Therefore, opponents attacking with a hook punch would be countered by the advance of a Wing Chun straight punch. Of course, the straight punch would arrive sooner.

Another vital principle of Wing Chun is economy of movement and energy. For example, there are no hard blocks employed in Wing Chun. Instead a counter-strike would be delivered to intercept the attack. In this way, energy is not wasted by blocking and countering; both are delivered simultaneously, thus deflecting the attack and landing a blow. Kicks are generally low, aiming below the waist to stop advances or trip-up opponents.

The first form that a student will be introduced to inWing Chun is Sil Lim Tau, or "The Little Idea". Sil Lim Tau is the Foundation of the entire art ofWing Chun, as it contains all the fighting principles of the art within the form. Beyond teaching correct technique, it teaches the practitioner to relax properly, maintain stable balance, the proper use of the eyes in the fighting environment, and a host of other principles. By diligently practicing Sil Lim Tau, the student will quickly begin to develop Wing Chun's characteristic explosive, whip-like power in his movements, and will begin to learn how to take a creative approach to fighting.

This is the secret contained within Sil Lim Tau - the freedom from practicing rote patterns of empty technique. By learning to apply correct fighting principles the practitioner's techniques will be able to flow infinitely in unison with the enemy's actions. Instead of taking the impossible, analytical approach of adhering to pre-determined technique patterns, the Sil Lim Tau trained Wing Chun fighter is able to use principles to control the fighting environment and create a winning situation. He can adapt to any fight without hesitation, and can apply his movements without conscious thought in perfect unison with the enemy.

Additionally, while training this form with correct breathing, the more advanced exponent is also practicing meditation and strengthening the Gong Lik (internal power).

by appointment only, call

(make sure you dial the right number and make an appointment before showing up at school.)   thanks

Learn all about our training and our various classes.

when there is a true friendship, there is no lack of understanding.....